The current global pandemic is unprecedented in its nature, but as more and more stories of listlessness and obstacles pour in, tales of innovation stack up as well. Various examples of human ingenuity as well as creativity have increasingly been on display since the lockdown has presented unique opportunities for artists with interesting stories to tell.

With many film festivals being held exclusively online this year, a lot of them have also formed separate categories for films exclusively made during the quarantine period—a concept explored and demonstrated in John Babu’s short film The InTEXTigator.

The group of film lovers from Toronto behind this short film created it exclusively during the lockdown. 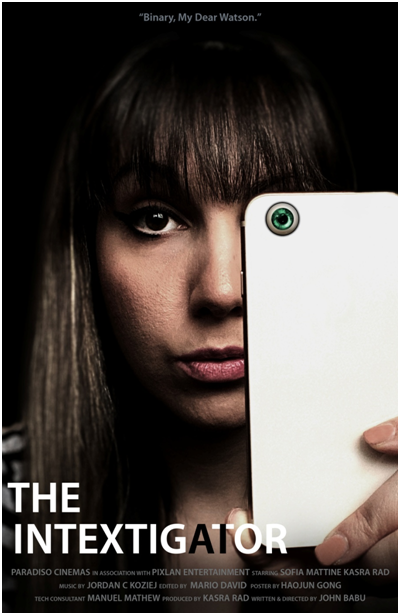 Photo: The movie poster designed by Haojun Gong.  The InTEXTigator can now be viewed on YouTube.

Writer-Director John Babu, a York University alumnus, had always experimented with low-budget filmmaking. His previous short film A Candle in the Dark (2018) had been nominated for film showcases such as The Lift-Off Sessions and First-Time Filmmaker Sessions.

The 2020 global lockdown, however, posed its own set of challenges.

“I had the general idea for The InTEXTigator a few months before the shutdown began,” says Babu. “When every country began closing down, I realized that it would be the perfect time to make this project.”

Babu used various social media platforms to assemble a cast and crew who shared his vision.

“There were a lot of people around the world that were bored and had nothing to do. Since we are in 2020, the technology available to us does not make us completely ‘locked out’, unlike previous pandemics in history. Even during social distancing, we can still reach out to anyone around the world, with the touch of a button.”

Although he scouted far and wide for his cast, he found his perfect lead in fellow York alumna Sofia Mattine, through a global Facebook group. Having some experience in modeling/acting, Mattine was immediately fascinated by the project.

“When I was first approached to be in the film it made me excited to be able to be creative during a very difficult time in the world. The project also appealed to me because the premise had a strong focus on technology, something we’re all relying on now more than ever for connection,” Mattine explains.

This exploration of the potential scopes of technology resonated with the theme of the film as well. 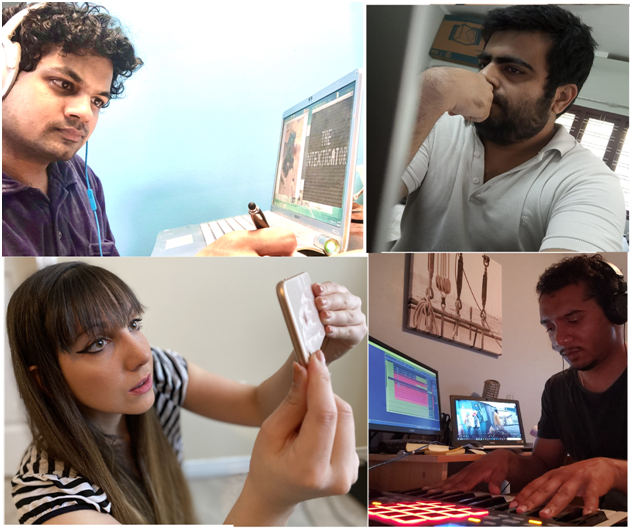 What’s described by viewers as a very innovative and unique story, The InTEXTigator is a sci-fi thriller that proceeds through a text conversation that happens between Elizabeth Brown, a grieving widow, and the newest recruit of the Toronto Police, Sherlock the AI. It is best seen in portrait mode on a phone screen, as it is shot in vertical format to resemble an actual phone screen conversation to place the viewer in the middle of the action.

As the film unfolds, we experience the narrative’s twists and turns through Elizabeth’s perspective until the riveting climax. With the clever premise of a woman working with a machine to unravel the truth, the film also covertly addresses some deep philosophical questions: How much power should we give technology? Are there any areas where automation should be excluded from? Will the benefits of using such gizmos outweigh the can of worms that it will inevitably open?

“What is scary about the concept is that it isn’t a stretch to believe that such a scenario can indeed happen, a lot sooner than when a lot of people may think as well,” said Manuel Mathew, the tech consultant for the film.

Although viewers might notice some elements from 1984 emanating from The InTEXTigator, the film also makes it a point to highlight the pros of technology, and show that the future doesn’t necessarily have to be bleak. Artificial intelligence is a growing field, and it is soon expected to automate many areas, increasing its efficiency.

With many individuals and societies actively researching the possibilities of such technology, the film may offer a glimpse into our immediate future. With current restrictions still limiting physical interactions, its makers may have already received a taste of such a future.

“The inefficiency of working on the project exclusively through Zoom’s screen-sharing feature had its own challenges.”

“There are, of course, advantages in collaborating virtually like what we did, using Zoom meetings and text messages to communicate ideas,” says Babu. “However, for one solution that it brought, it created another problem. Without physically meeting others, it just wasn’t the same. There is a reason why the old fashioned ways have worked for so long.”

The film’s composer Jordan Koziej also weighed in on these challenges, regarding his melodic creations for the film.

“When I read the script, I automatically knew what kind of sound was needed for this film and created a few cues for it. It was one of the more challenging films to make music for, as there were no on-screen actors, dialogues or scenes,” explains Koziej.

The inefficiency of working on the project exclusively through Zoom’s screen-sharing feature had its own challenges for editor Mario David. Although he had plenty of hands-on editing experience working for various news channels, remote editing with Zoom was new for him.

“It was frustrating at times as sometimes the internet connection was down, sometimes the laptop was lagging. Since I’m not in Canada, we also had to work at atypical times due to the time-zone difference. However, it was still hugely satisfying to see the film coming together, one way or another,” explains David.

All the hard work from Babu and his team was rewarded, as positive responses have been pouring in about the film.

“Cerebral, succinctly scripted for the plot. Razor sharp in its story arc. The film really nails the terror one would feel from a complete AI-induced molestation of privacies and personal sovereignties. Marvelously executed to penetrate deep on a human level,” YouTube viewer by the name Arian M. commented.

So what’s next for his team? People are curious to see more of Sherlock, explains Babu.

“With the lockdown set to continue for a while, I have already started writing a sequel.”

They say necessity is the mother of invention. With the world looking so unfamiliar day by day, perhaps it is a fertile land for innovations now more than ever. With plenty of resources and tools available, and numerous examples around us to inspire, perhaps it may finally be time to finish that song you always wanted to write, or learn a new language, or write that book like you had planned.

Perhaps the universe is conspiring for you after all.

3 thoughts on “Creativity in Quarantine”

❤🔒A little post on the West Coast of British Columbia where travellers and lovers leave a lasting memory 🔒❤🔑
"...His response further exacerbated my irritation—he didn’t say a word, he didn’t even turn around, he just flipped me off and continued to puff on his cigarette.
🌺🌷Spring is in the air! 🐣🌱 April is here so here's a photo called "Oh Deer" by @chrysadancey capturing the beauty of nature! 🦌
Deep and profound words in the poem "Rays of envisions" by the talented Aderolu Nuriyah - this is an inspirational and must read poem that you can find on our website today! ✅